Ringelblume update and Namlook tribute album on the way... 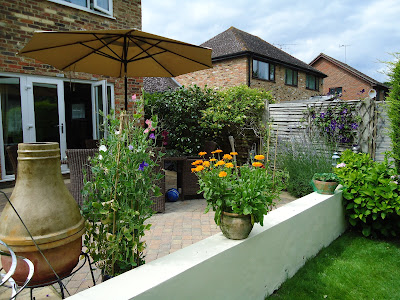 With Britain caught up in the middle of the coldest March weekend in 50 years and snow featuring heavily in weather forecasts the chance to plant my marigold seeds in Pete's memory (see previous post) hasn't arisen yet. While we're waiting for the sun to come out and the merest hint of blue skies we have this heartwarming photograph, sent by Mark from Bisley in Surrey. Mark says: I planted from  Pete's seeds a couple of years ago, and thankfully they keep coming back, with very little work! Big thanks, Mark for a lovely pic. As soon the weather warms up my seeds will be planted too. Hope you will join me.

In other news Mick Chillage announced this week on Facebook that there is to be a Pete Namlook tribute album released in the not-too-distant future. Whilst this news inevitably arrives with more than a little sadness (after all Fax was supposed to be celebrating its 20th anniversary this year) it is also surely the greatest tribute to Pete that there could possibly be. Mick says: 'Ear Rational in the states are gonna be releasing a Namlook tribute comp...Confirmed contributors for this release...Bill Laswell, Spyra, Lorenzo Montanà, Mick Chillage, Charles Uzzell-Edwards, Eraldo Bernocchi, Krystian Shek, Gate Zero, Material Object. We are awaiting responses from other folks. Stay tuned.' It looks as if this release is to be a 4-CD set with two CDs by Fax artists and two by fans.

It is possible to follow news as this project develops here:

Let's hope as many Fax artists as possible come forward to make this the massive tribute it deserves to be.
Posted by Christian Wheeldon at 00:11