The news in brief 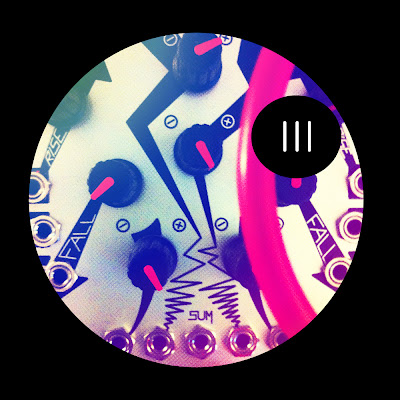 Hi there. Firstly, my apologies for a short period of absence from the blog. We've been having a heatwave in Britain and I just haven't been able to bring myself to sit at the computer for any extended period of time on warm summer nights. I've also had a few technical problems with the blog, as it wasn't allowing me to enter text. A little bit of investigative work revealed that Blogger now no longer works with Internet Explorer 8, so here I am in Mozilla Firefox. Anyway, no matter...

Over the summer I've been listening to some of the fantastic records coming out from those who once recorded for Fax and I thought it might be nice to put together a little cut out and keep guide to some of the labels that have released and/or will be releasing work by former Fax artists. Feel free to bookmark this page but have your wallet ready, as this could get expensive!

One of the albums I've been listening to recently is Draft III by Material Object. Now, those of you who avidly followed Fax output will know that Material Object recorded two Elektronik albums with Pete Namlook. Draft III was Material Object's ideas for what would have been the third record in the series but tragically Pete never got a chance to collaborate on this one. Musically it picks up where Elektronik II left off, offering up some spine-tingling, ethereal sounds and I can't help but think that had this one been completed it would have been the strongest in the series. As it is it is still an excellent album. It isn't available as a physical release right now (Material Object is reluctant to do so, as he feels it is unfinished) but it is available as a download at this link:

If you download it (highly recommended) and you like it why not drop Material Object an e-mail to let him know and who knows...we may get a physical release. It certainly deserves one. 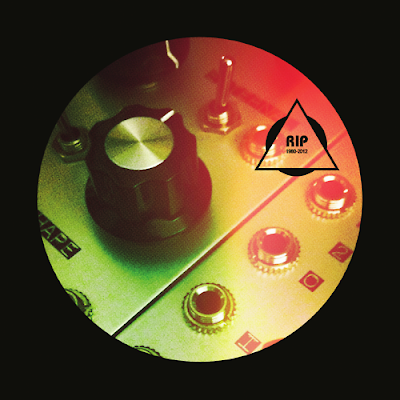 Meanwhile Carpe Sonum Records is releasing a CD of Indiana Drones, by Material Object and Phonaut. This record was sent to Pete Namlook for possible release on Fax but whether he got the chance to hear it before his tragic passing is unknown. It is a beautiful album and I'm so glad it is getting the physical release it deserves after a period as a download only.  For more information and to order see here:

Dave from Carpe Sonum is also hard at work on Die Welt ist Klang, an epic eight CD tribute to Pete Namlook, featuring four discs of those who recorded for the label and four discs of contributions from fans. The tracklist is available here:

Profits from this project will go to Pete's family and if you would like a copy and haven't already ordered you can do so here:

All pre-orders will help to fund the completion of the project and the CDs will be housed in a special wooden box.


At some point in the not-too-distant future Carpe Sonum also plans to release the following: Mick Chillage (an as yet untitled album), Gate Zero - End of Days, Thomas P. Heckmann - Lost Tales vol. 3, Moss Garden (Lee Anthony Norris  & Dimitar Dodovski) - In the Silence of the Subconscious with the possibility of a Robert Musso Transonic 3-CD reissue to follow... 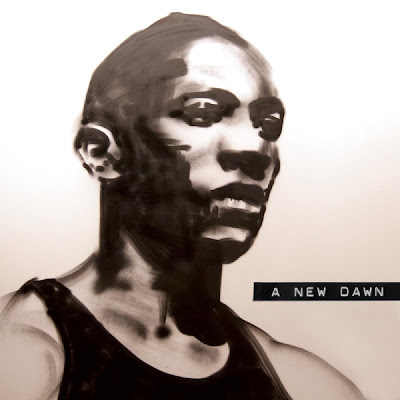 Keith Downey of Psychonavigation Records has also been hard at work, releasing the work of several Fax artists. In addition to Lorenzo Montana's Eilatix, the label has just released A New Dawn by Pure Evil (aka Charles Uzzell Edwards) and the following months will see albums from: 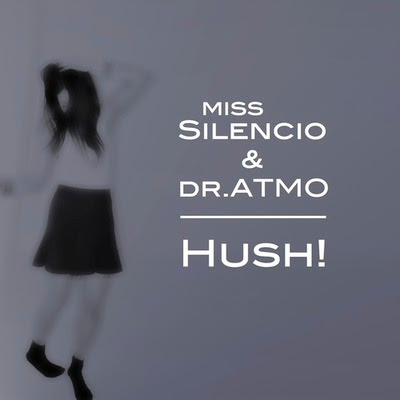 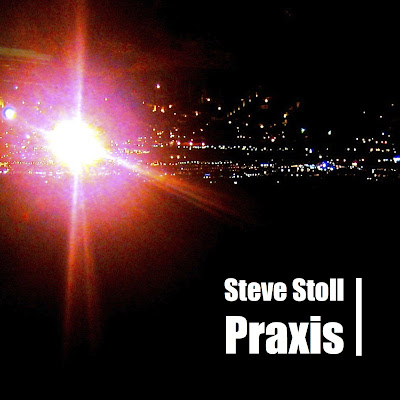 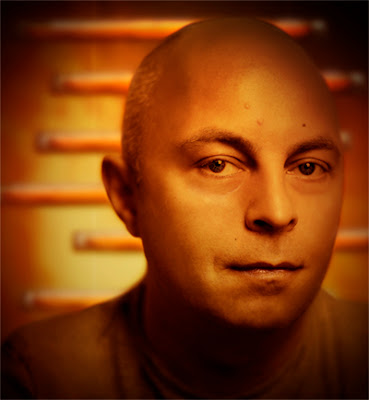 ...and Oliver Lieb - Inside Voices (available in November) 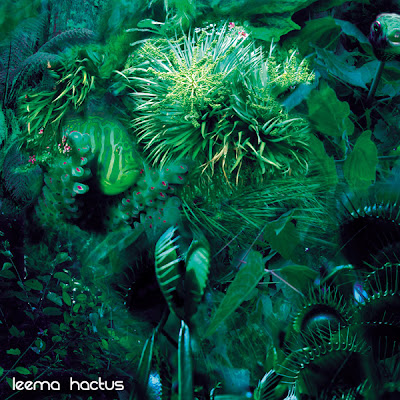 Lorenzo Montana's next solo album, Leema Hactus is also slated for a release in early 2014. For a preview of the album see here:

For more information about any of these releases and to order from Psychonavigation Records see here: 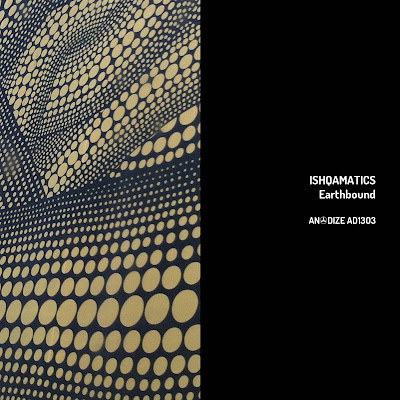 Before I disappear here is a quick update on Project Ringelblume, the plan to grow flowers and plants in Pete's memory. I recently received this message and image from Har (aka Third System on the Discogs Fax forums):

I thought I would send you a picture of what Pete's tomato seeds look like now. Incredible plants. Picture taken on or around 27th July on my Samsung moby. Going to be a great crop. 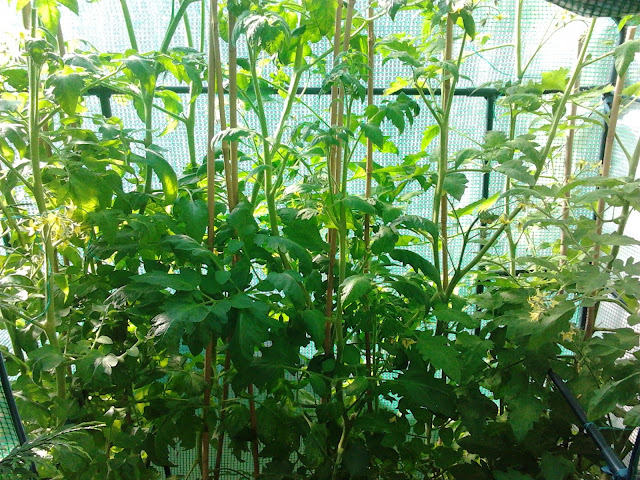 Many thanks, Har. Much appreciated! My marigolds have also been coming on a treat and I like to think that Pete would be suitably pleased by our horticultural achievements this summer. Here are a few photos of my plants, taken yesterday. Enjoy... 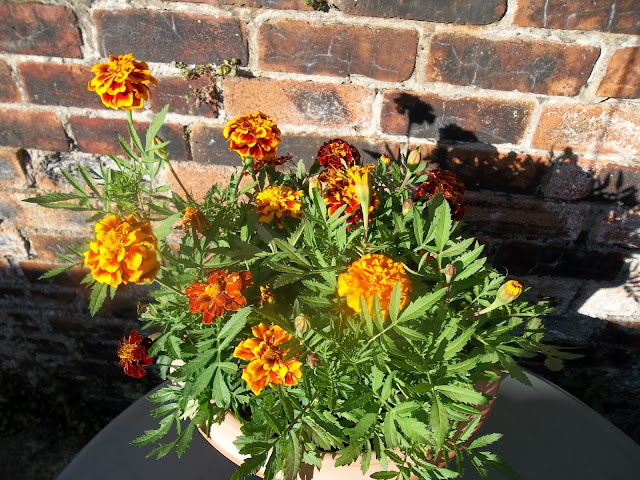 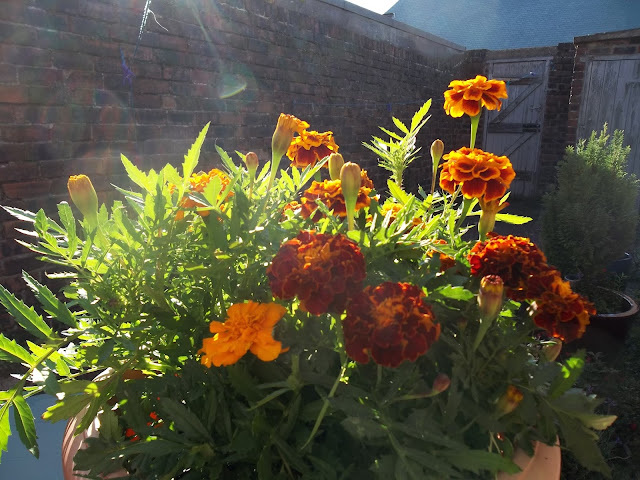 Posted by Christian Wheeldon at 03:52 No comments: