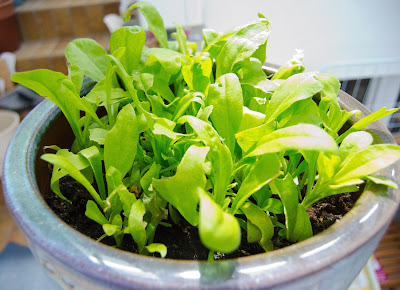 This week I received this update on Project Ringelblume, from Sven in Germany:

Here are some pics I just took from my "Project Ringelblume" and Peter's Peppers.

This week, I found the Ringelblume attacked by snails (so can see that the leaves are partly destroyed) so I just took them off the garden and placed them closer to the house.
The peppers are doing really fine this year. The black pots are all cultivated from the "Sibrische Hauspaprika" Pete sent me years ago. The red pots you can see in the back are some Habaneros a friend of mine gave me last year.
Hope, your project is running fine as well :) 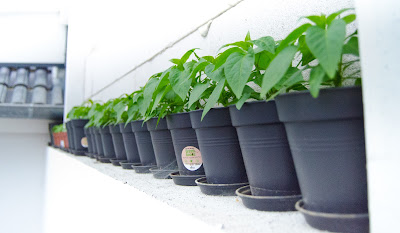 Thanks Sven. Keep sending the pics! Well, the answer regarding my little project can be seen here: 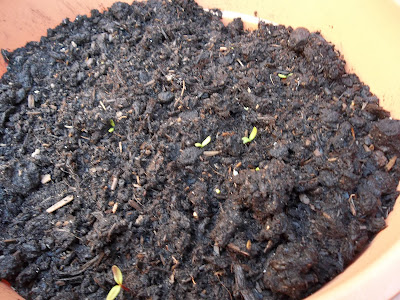 Almost three weeks since I planted my own seeds their growth is best described as unspectacular. This week in Britain we have had grey skies, a lot of rain and hailstones several times. That's right, folks: hailstones in mid-May! Incredible. Not to worry! The weather is supposed to be picking up this weekend, so let's hope for a bit of warm sunshine and more growth with my marigolds...
Posted by Christian Wheeldon at 23:44 No comments:

March to the finish line 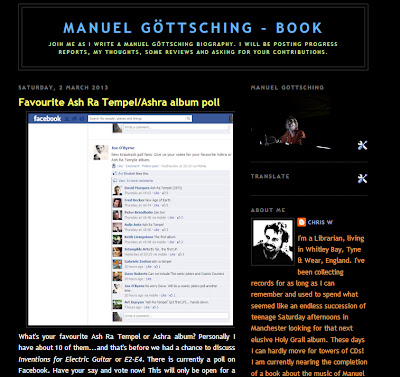 Hi there. This is just a quick update and an apology if new posts on the blog have seemed a little less frequent over the last few weeks. The reason for this is that for the last five years I have been spending a considerable number of my weekends and holidays working on a book about the legendary musician Manuel Göttsching. My other blog is here: http://manuelgottsching.blogspot.co.uk/ and I also plan to update it with the latest developments soon.

Over the last three weekends I've been proofreading my book before it goes to friends for further checks and a few fresh pairs of eyes. Having spent a very long time putting it together the time has come to finish the job off and to be able to share it with an audience. With this in mind please bear with me if there are little periods when the blog isn't updated as much as it has been. It will continue but I'll be doing a bit of juggling between different projects...

In other news over the weekend I've really been enjoying Autumn of Communion 2, a superb record that probably betters Autumn of Communion's magnificent first effort but don't take my word for it. At time of posting the record is currently streaming in full here: http://anodizesound.bandcamp.com/album/autumn-of-communion-summer-2013

Lorenzo Montana's Eilatix has also arrived and I've been enjoying this a great deal as well. If you liked Black Ivy this is really going to float your boat, as stylistically the two records have a lot in common.

I'm heartened to see that Ear/Rational, Psychonavigation and Anodize are between them now releasing music by many former Fax artists and I'm really looking forward to hearing the (ever expanding) Pete Namlook tribute album, or should I say box set.

In other news I was just out in the backyard and the marigolds that I'm growing as a tribute to Pete have started to come through. Photos will hopefully follow soon. Don't forget that if you decide to grow marigolds or any other plants as a tribute to Pete send your photos and I'll put them up here on the blog.

As regards interviews for the blog I am promised a couple of exciting exclusives but it isn't so easy to get the answers to my questions, as the musicians are currently busy touring the world. At some point I'm sure that this will come together. I have another interview in the pipeline but this will be via telephone, as the musician I've had contact with is incredibly busy. I will need to record our conversation and then transcribe afterwards, which will take a little time. Should be very interesting, though.

So, please do bear with me. The blog will still be updated with new content whenever I can find the time and get the opportunity. Speak soon...
Posted by Christian Wheeldon at 10:51 No comments: 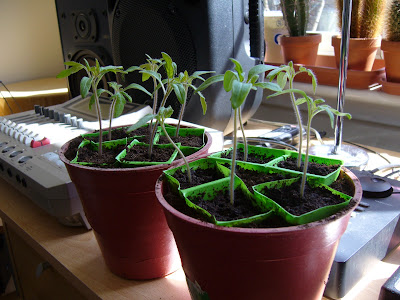 Here's the latest update regarding the project to plant marigold (or any other seeds) as a tribute to Pete. As I wait for my marigold seeds to germinate I have received these great photos from Har. Those of you who visit the Fax discussion threads on the Discogs website may know Har as Third System. He says:

The story behind this is that every time I ordered CDs from Pete we would speak about our gardens. The last order I received from Pete was 'Labyrinth V' . We had been speaking about our tomato crops and he kindly enclosed some seeds from his Tomate Harzfeuer plants. He said these were from eastern Germany and were excellent for growing outside. These pictures were taken two weeks after sowing and they are very sturdy young plants indeed.

So here they are posing nicely in an appropriate setting, my FAX tomatoes. 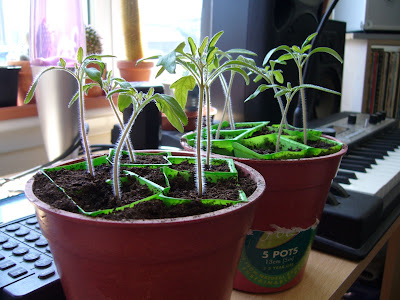 Many thanks, Har. Much appreciated!

Do you have any photos to share? Any plans to plant seeds in Pete's memory? If so, please send your pictures to the web address on the blog and I'll put them up for all to see.
Posted by Christian Wheeldon at 14:57 No comments: 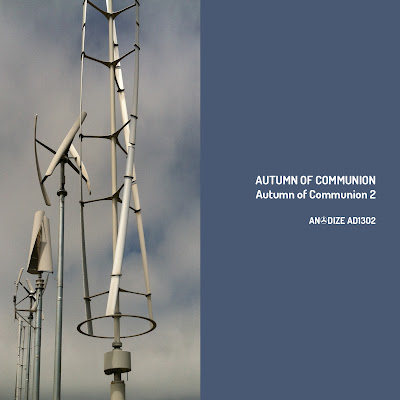 Q: First of all when was the new album recorded? How long did it take to put together?

A: Autumn of Communion 2 was pretty much started shortly after the release of the first one as far as I can remember, but with the sad passing of Pete everything seems a little sketchy to say the least. I think we had already started on the first track, which was So Powerful in the Mass when we got news of Pete’s death. That slowed us down for some time, as we were hoping to see AOC2 getting released on Fax again and we were in total shock...I guess we really got stuck into the album again in December 2012 and worked solidly into late January.

Q: How would you compare the creative process for this one with the first AOC album? Which elements were the same and which (if any) differed? 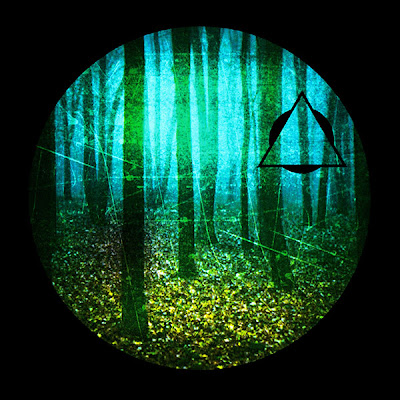 A: The creative process was pretty much the same as on the first. Lee would start the ground work sending me beats, drones, field recordings film samples etc. and then I’d get to work on these with more synths, beats or further manipulations of Lee’s sounds until a structure we both liked happened. In some cases tracks were born in a night or so but others took longer to get right. I added some movie samples and we also tried to add sound bites from movies that haven’t been over used in the electronic music scene like the ubiquitous THX1138 and Blade Runner moments. We are always careful not to overuse or try and make the samples to be the focus point of the track..

The sessions worked in the same way to a degree but the results are somewhat different with this. I guess we were both conscious not to repeat ourselves too much, although there was no real brief on what the album was to be.

Q: How would you compare the two AOC albums? Can we expect similar music this time around or are there some unexpected twists?

A: I guess the first one was maybe a little more earthy and emotive and the new one is a little more out there;  a sort of 21st century twist on space ambient music with a more beat driven approach. That’s how I see it. Maybe Lee has a totally different view on it ? It's still melodic and very emotive in places too.

Q: What could you tell us about each track? Would it be possible to have a sneak preview in your own words?

A: I guess track one, The Interpreter of the Signs, is a rather sprawling psychedelic mix of experimental drones; big bass spacey atmospherics and slow-mo grooves.

Track two, Interval One, is like a slow boat trip at night through a massive canyon.

Track three, So Powerful in the Mass, is a journey through the world of alien life forms.

Track four, Interval Two, is the emotional memoirs of someone in the distant future living on a lonely space capsule looking back at how planet earth was once such a beautiful place.

Track six returns to earth with Goodbye Pk, a rather melancholic tribute to the great man.

Cosmic Board Fusion really brings a lot of the albums themes together but with some infectious lead lines, shimmering pads and driving grooves.

The final track, Perpetua, leaves us with a haunting yet delicate mix of ethereal synths and field recordings.

Q: Do you think there were any conscious themes behind the music this time or was it more a case of just allowing the music to flow and seeing what arrived at the end of the creative process?

A: I think it was a good mixture of both, with tracks like Goodbye Pk we both knew that it had to have a certain level of emotion, so we spent a lot of time getting the arrangement right. Some elements were taken out from the early ideas and then one night the flow just happened and that magical element the track needed just emerged in one live take.

Q: …and AOC II is going to be released on the relatively new Anodize label with special packaging?

A: Yes in a lovely metal case with gorgeous inlays and a transparent CD tray.

Q: Are there any plans at all for an AOC III in the future?

A: Yes there is, with a new production approach hopefully.

Many thanks, Mick, for taking time out to chat to NMLK. Very much appreciated.

Autumn of Communion 2 will be shipping around 5th June 2013 and is available in a limited edition of 300 CD copies. For more information and to pre-order see here:

...and for a teaser check out these sound clips:

http://soundcloud.com/mick-chillage/autumn-of-communion-2-album
Posted by Christian Wheeldon at 02:04 No comments: 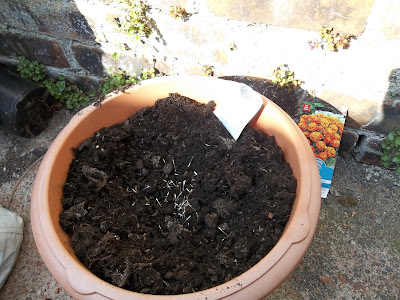 Those of you who have been following the blog for a few months may remember that a while back I suggested a little project to plant marigold seeds in memory of the one and only Pete Namlook. Check out my original post about this here: http://nmlkfax.blogspot.co.uk/2013/03/project-ringelblume.html

Today, after a long, cold winter I finally felt confident that I could plant my seeds without frosty nights destroying them. So, on a sunny afternoon in the backyard I got my project underway. Here's hoping that the birds don't eat them! Will you join me in planting some seeds in memory of Mr. Namlook? These don't have to be marigold seeds and I must stress that this project is just a bit of fun but I like to think that Pete would have enjoyed it. If you do decide to plant seeds when they finally grow please send your photos to me at the e-mail address provided at the top of this blog (over on the right hand side) and I'll post them up here for everyone to see. Happy gardening! 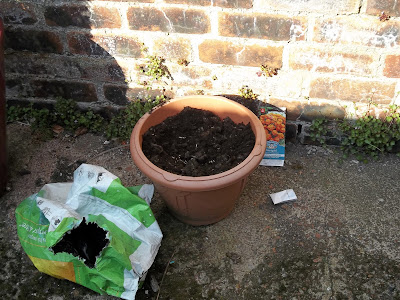 Watch this space for another NMLK exclusive, coming soon...
Posted by Christian Wheeldon at 14:36 No comments: