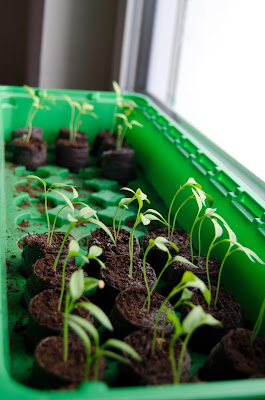 Here's a little update with Project Ringelblume (the idea behind this being to grow marigolds in Pete's memory). For more information re: my original post on this topic see here.

I've been off work this past week and although it has been sunny on and off here in the North of England I tried to sit in the backyard yesterday and had to come in because of an icy wind. The temperatures are supposed to be picking up soon so I'm hoping that sometime in the forthcoming week I will be planting some seeds. If this happens oddly enough it will be pretty much the same date that Pete suggested I plant my marigold seeds a couple of years ago.

While I'm waiting here is a message very kindly sent from Sven in Germany. Referring to the image above (some of Pete's peppers...love a bit of alliteration alongside my horticulture) he says:

This is the third generation of the seeds Pete sent me back in 2011. From the first season only one single chilli pepper (not plant!) survived after a parasite ("Spinnmilben" in German) killed all the plants in a matter of a few days. I managed to rescue this one tiny chilli pepper and cultivate 20 more plants out of it during the second season in 2012. I kept in touch with Pete back then and he was always very happy that I managed to cultivate new plants out of his seeds. So this time, it also looks quite good so far. Pete's chilli peppers taste really great. They are quite hot, but in a very tasty way (not just burning hot).

I decided to start my "Project Ringelblume" today. It's not that warm here in Germany, but I think it might work out well. I'm planning on seeding some in the garden and some indoors.

Big thanks, Sven for sending that. Very much appreciated!

As I say, more on this soon with a bit of luck. Ultimately it's all a bit of fun but hopefully Pete would have enjoyed it.
Posted by Christian Wheeldon at 03:10