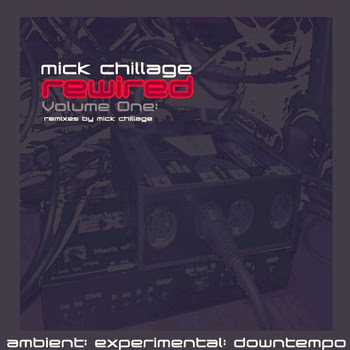 Well, over the last couple of days I've been very much enjoying Mick Chillage's latest release Rewired Volume One. This is an excellent collection of his ambient/experimental/downtempo remix work and fans of FAXology will doubtlessly find much to enjoy here. The tracklist is:


Mick has this to say about the collection:


Over the last few years I have been fortunate to be asked to do many remixes for various labels, artists, and friends, many of which saw mainly digital releases and a few which made it onto CD and some of which unfortunately never ended up being released.

In some cases where I created an ambient remix of a techno track, I found these often got overlooked somewhat, a problem due to the fact that they ended up in the techno or house sections of Juno or Beatport etc.. I guess my thinking outside of the box in these very much genre specific days was a poor creative decision on my part?

But my true feelings on the art of remix is that the remix should really bring something new to the original track, rather than purely just adding a new rhythm section or stuttering and juggling and filtering the musical elements of the original, so this is what I tried to achieve with these. From a creative aspect I am still extremely happy with these remixes despite their lack of critical or commercial success.

Now in 2013 I have over 30 remixes on my hard drive and feel that it would be a great time to bring most of these together in two collections.

Volume One of "Rewired" will focus on my Ambient/Experimental and Downtempo or Chillout reworks and Volume two will feature the more upbeat moments which venture from Electro, Techno, House, IDM etc.. Both volumes will feature some previously unreleased remix exclusives.

Of course none of this would have been possible without the assistance of all the great artists and labels who firstly asked me to remix them and now have given me the freedom to finally release all these remixes myself... So a big thank you to all involved.

To check out some sound clips from the album/download it here is the link:

Posted by Christian Wheeldon at 13:28